Forgive us Nature (for we have sinned)

As a woodworker, Del Guidice has been creating artwork for over 30 years. In discussing this piece, he says, “Raised as a Catholic, going to confession at church was a big part of my growing up. I learned to confess my sins (I surely had some) and ask for forgiveness. As an artist working in wood, I saw the opportunity to bring forward the process of confession to address society’s collective sins with regards to our environment.”

“To that end, this bench is an open reference to the confessional in churches, and is built using recycled word that is left over from my woodworking projects. The key element of this piece is the window through which you confess your sins. In it, I chose to confront our “plastic” sins by casting found trash from beaches and parking lots in clear resin. Serendipitously, it also had the effect of stained glass windows in churches, where the light of God pours down upon us, showing us the way, for we have sinned.”

Del Guidice was born in New Rochelle, NY; grew up in the metropolitan New York area; and moved to Boston in 1974 to pursue his B.A. in Psychology and Personnel Administration. He also studied with Alphonse Mattia and Jere Osgood at Boston University’s Program in Artisanry.

When renovations to the museum and its grounds were planned in 2020, it was decided by the designers and museum staff to include artist-made benches in the newly landscaped, “Woodland Path” sculpture garden. A call to artists was sent out and 25 artists from all six New England states sent proposals for outdoor seating. Curatorial staff and director Charles Weyerhaeuser voted on their favorites, and five benches were chosen. The artists each received a stipend to design, build, and loan their bench for a three-year period, after which the artist can offer them to the museum or take them back. DelGuidice’s bench was one of the five chosen. 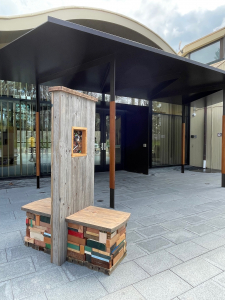