This bronze sculpture celebrates a work on paper by the same name, In the Woods (Im Walde) by German artist Max Klinger (1857-1920), which is in the Art Complex Museum’s collection. Sculptor Christopher Frost was intrigued by the mysterious letter left in the woods in the Klinger print, inspiring this small, bronze envelope carefully positioned on a moss-covered boulder. He wrote:

“By a path in a sun-speckled glade lies a folded coat, with a note prominently displayed on top; a derby hat rolled into the path. Though it is possibly not immediately apparent to us, this image deals with a suicide. Dark shadows from the trees mingle with sun-dappled lighted areas of the path and branches, forming a pattern effect.”

The sculpture was created for Collection Connection, an exhibit hosted by the museum in 2003-2004 that featured the Boston Sculptors. As a child, Frost was enamored by exploration tales like Huckleberry Finn and Treasure Island. He builds sculpture that transforms everyday objects into imaginative stories. His whimsical combinations of cast bronze, wood, and found materials invite viewers to see things through the eyes of a child.

Frost lives and works in Somerville, Massachusetts, and his sculptures have been exhibited and collected by museums throughout New England. 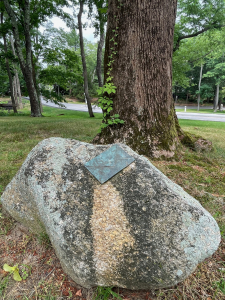