David Phillips first exhibited this sculpture at the Art Complex Museum during the Way of Tea exhibition hosted in 1985. Fabricated from cast bronze and cut-stone, the “sliced-boulder” sculpture weighs about six hundred pounds. Phillips’ signature style combines natural forms with cast materials that are meant to be interacted with and touched, celebrating objects found in nature by reconfiguring them into sculpture.

The artist first experimented with stones collected on the beach by tracing and drawing their natural forms onto paper. Later he cast them in plaster and then in bronze. Combining these elements earned him international recognition as he “sculpted” entire outdoor areas in cities, at universities, New England hotels, and the gardens of Japan.

Porter Square Megaliths, a site-specific installation in Porter Square, Cambridge, Massachusetts, is an example of the artist’s urban installations. It was commissioned for the Massachusetts Bay Transportation Authority (MBTA) through the Cambridge Art Council’s Art on the Line project, funded by the United States Department of Transportation. Phillips’ work muddles the boundaries between art and the landscape with his trademark approach: cut stones, with portions replaced with treated cast bronze. 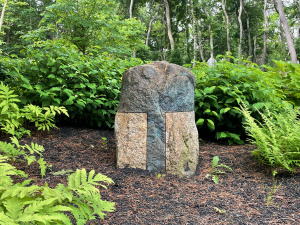 Sculpture: “Requiem” by Kitty Wales Sculpture: “Crest of the Wave” by George McGoff
Scroll to top