Leah Woods is an artist working primarily with wood, building functional and non-functional objects.  The shapes for Triangular Bench evolved from the idea of several separate, individual elements unifying to form a whole. The bench is composed of trapezoidal shapes with lines extending to create angular yet fluid transitions.

Woods says, “After walking the grounds around the museum and exploring the curvilinear paths, I began to imagine angular shapes contrasting the gentle feel of the remodeled sculpture garden. By imagining how people might interact with this bench, I wanted to provide places to sit where someone could feel a sense of personal space, while also opening the possibility for interaction and conversation.”

Having received her MFA in Woodworking and Furniture Design from Rochester Institute of Technology in 2000, Woods designed and built one-of-a-kind furniture before transitioning to explore conceptual and sculptural objects.  Woods is also an Associate Professor of Art at University of New Hampshire where she teaches woodworking and furniture design classes.

When renovations to the museum and its grounds were planned in 2020, it was decided by the designers and museum staff to include artist-made benches in the newly landscaped, “Woodland Path” sculpture garden. A call to artists was sent out and 25 artists from all six New England states sent proposals for outdoor seating. Curatorial staff and director Charles Weyerhaeuser voted on their favorites, and five benches were chosen. The artists each received a stipend to design, build, and loan their bench for a three-year period, after which the artist can offer them to the museum or take them back. Wood’s bench was one of the five chosen. 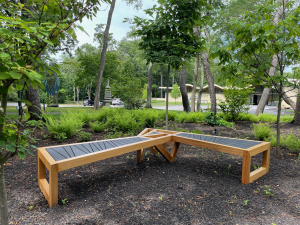