Valentine’s Day is the theme for this month’s Collections Spotlight. The Covid-19 pandemic has sparked some strategic but creative ways to celebrate: virtual dates, movie marathons and take-out dinners are popular options. Chance Meeting, created in 1941, by American artist Martin Lewis, reminds us of the serendipitous encounters that sometimes led to romance in days gone by. The artist created 143 prints from 1915-1945, many of them featuring relationships as their subject. The characters in the foreground of Chance Meeting linger outside a convenience store and though they stand several feet apart, their body language reveals their curiosity towards each other. The Bell Telephone phone booth symbol and advertisements disclose the era, especially the sign for five and ten cent newspapers. In the background on the left, another couple stands on the corner engaged in conversation.

The skyscrapers of New York inspired some printmakers, but Lewis preferred to lower his gaze to the sidewalks and portray anonymous people, like these couples, on the city streets. Watching the characters interact in Chance Meeting is an almost theatrical experience, and in fact, Lewis’s later work reflected his association with film noir, a term given to suspense films with scenes that took place at night. This mysterious encounter and the surroundings offer a historical record of New York City as well as an artistic interpretation. The image was among the presentation prints for the Society of American Etchers, an indication of how important the artist’s work was considered. In the 1950s, the market for Lewis’s prints declined and the artist died in obscurity in 1962. Since then a steady resurgence of his work has taken place culminating in an impressive catalogue raisonné, issued in 1995.

Now a celebrated printmaker and painter, Lewis applied his extraordinary skills as a draftsman to scenes of New York City and rural Connecticut, imbuing his work with a palpable sense of life, atmosphere and mood. He remained a devoted Realist artist who relied on his own observations to record, in his words, the “homely details of common everyday life” 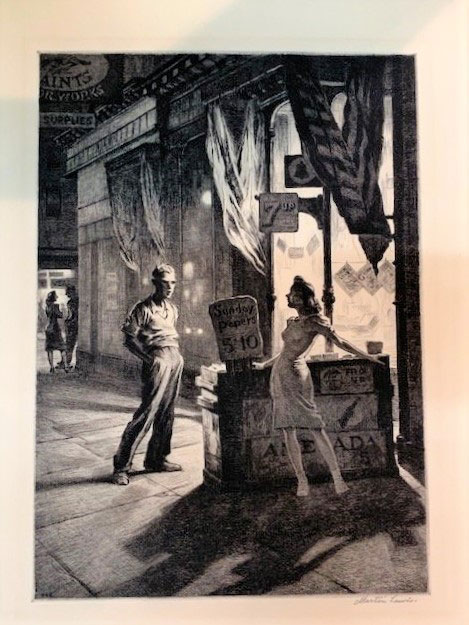