Greeting visitors near the entrance to the Art Complex Museum, Michio Ihara’s kinetic sculpture explores motion, and the changing forces of nature, including light, wind and weather. The museum acquired the sculpture after hosting an exhibition of the internationally acclaimed artist’s work in 1989. The sculpture’s curved “s-shaped” wind-vanes echo the curvature of the museum’s roofline, which made it a great compliment to the museum’s entrance. Born in Paris and raised in Tokyo, Ihara attended Tokyo University of Fine Arts. He became an American citizen in 2001, settling in Concord, Massachusetts. His pursuit of this medium began while he was a fellow at the Massachusetts Institute of Technology’s (MIT) Center for Advanced Visual Studies in 1960, on a Fulbright scholarship. His practice focused on kinetic sculpture as he developed three-dimensional work in metals, and continued his exploration of the medium throughout his career, which included several large-scale installations in Tokyo.

Ihara’s work with stainless steel, brass and copper challenged him to strategically situate these materials in space. His large, carefully organized sculptures are integrated with their environment and constructed so that air and light flow freely through their transparent structures. These clusters of metal respond to air currents to create a living, breathing art work.

His refined forms reflect the Japanese aesthetic of clean, sophisticated, elegant designs. Throughout his career the artist has had an affinity for the architectural environment, in fact, many of his sculptures were commissioned for given locations within newly designed buildings. He works closely with architects to interpret their ideas and vision. Ihara spends time observing spaces before he begins his designs, as he considers space an abstract but essential component of his work.

A friend of the artist once called Ihara the “Vivaldi of metal.” As a music lover, this comment flattered him, as his artistic process of orchestrating sculpture can be compared to composing music. Although Ihara doesn’t sign his work, his fingerprints remain all over his structures, leaving a lasting, albeit hidden impression. This element of incompleteness awaits viewers who encounter his sculpture, to complete the work. Ihara considers human interaction with his art a dynamic form of collaboration.

Over the course of nearly fifty years, sculpture created by Ihara have been placed all over the world, including in many New England locales. Works can be found at the Wellesley Office Park, the Hyatt Hotel in Boston, the New World Center (Miami), Hanscom Air Force Base, Rockefeller Center, Neiman-Marcus in Beverly Hills, CA, Riverfront Park, Springfield, MA, Central and Porter Squares, Cambridge, MA, and of course, at the Art Complex Museum, Duxbury, Massachusetts. Ihara now lives in Canton, Massachusetts, near the Blue Hills Reservation. He continues to work in his studio every day, a smaller space, creating works on a smaller scale, while embracing the beautiful surroundings. 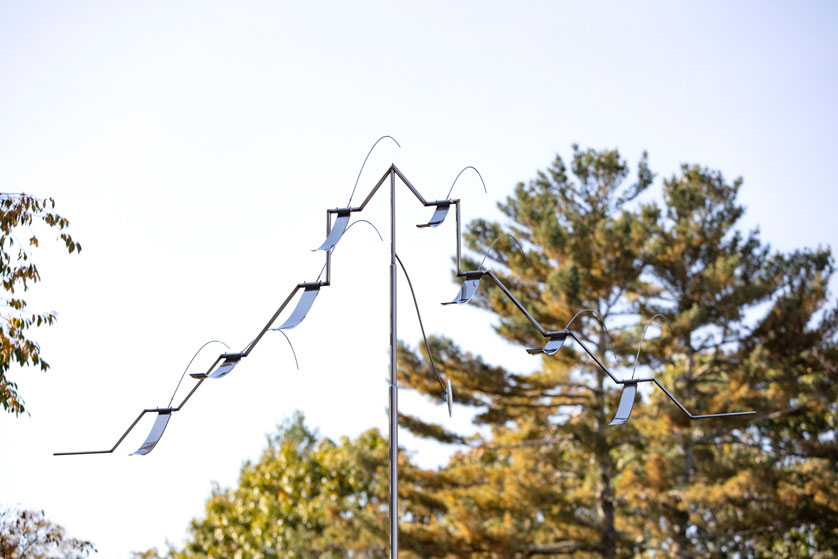