This spooky scene, complete with its long shadows, and eerie lighting, was created by artist Martin Lewis, a leading figure in the tradition of American graphic art. A critic for a Boston newspaper described him as “a New York artist, whose power of presentation, imagination, happy choice of subjects and sheer technical achievements have brought him rapidly to the forefront of American art.” A fitting image to share in October, the month of “All Hallows Eve,” the print reveals Lewis to be one of the few printmakers of his era that focused on nocturnal scenes.

Halloween originated hundreds of years ago as part of an ancient Gaelic festival of Samhain celebrated by ancient British and Irish Celts, meaning the “end of summer.” “Hallows” referred to saints and the “hallowed evening” to Halloween night. Historically, people dressed as favorite saints going door to door, singing songs and reciting verses in exchange for “soul cakes,” a treat similar to a biscuit. This initiated the tradition of trick-or-treating in costume, as we know it today. Halloween and All Saints Day (November 1) were considered a pivotal time of year when the seasons changed. It was believed that the boundaries between this world and the next became especially thin, enabling people to connect with the departed, which is how the holiday earned its haunted nuance.

Many of Lewis’s images are snapshots of the activity on the streets of New York City. These penetrating cityscapes were especially renowned, created when Lewis lived in Greenwich Village. Like artist Edward Hopper, who frequently turned to Lewis for technical advice, Lewis especially liked night scenes, and excelled in creating dramatic views. His compositions were typically from an unusual perspective and often included inclement weather and interesting sources of light, as in Ha’nted.

In Ha’nted, Lewis used a compositional devise involving a single artificial light source, which he effectively employed in many of his scenes of city life. One of the two figures in the print is carrying a lantern by his side, illuminating the man on the left and casting an extremely long, ominous shadow that cloaks the picket fence and then stretches beyond it, onto the barn in the background. The figure on the right remains in darkness, but due to the clever positioning of the lantern, his shadow is cast into the bottom right area of the picture, completing an almost diagonal compositional element. The contrast of artificial light with the night sky fascinated Lewis, and he successfully used this technique to achieve a sense of spookiness in this nocturne scene.

Lewis became a major printmaker in the United States in the 1920s and 1930s, creating nearly 143 images. Born in Castlemaine, Australia, he traveled in the United States, England, and Japan before settling in New York City. From 1920 to 1922 the artist lived in Japan, an experience that deeply influenced his printmaking. Praised for his graphic technique and ability to capture New York in its various moods, the printmaker rendered the effects of light and atmosphere through the use of line rather than plate tone. Other works by Martin Lewis in the Art Complex Museum’s collection include: Chance Meeting (1941) and Stoops in the Snow (1930). 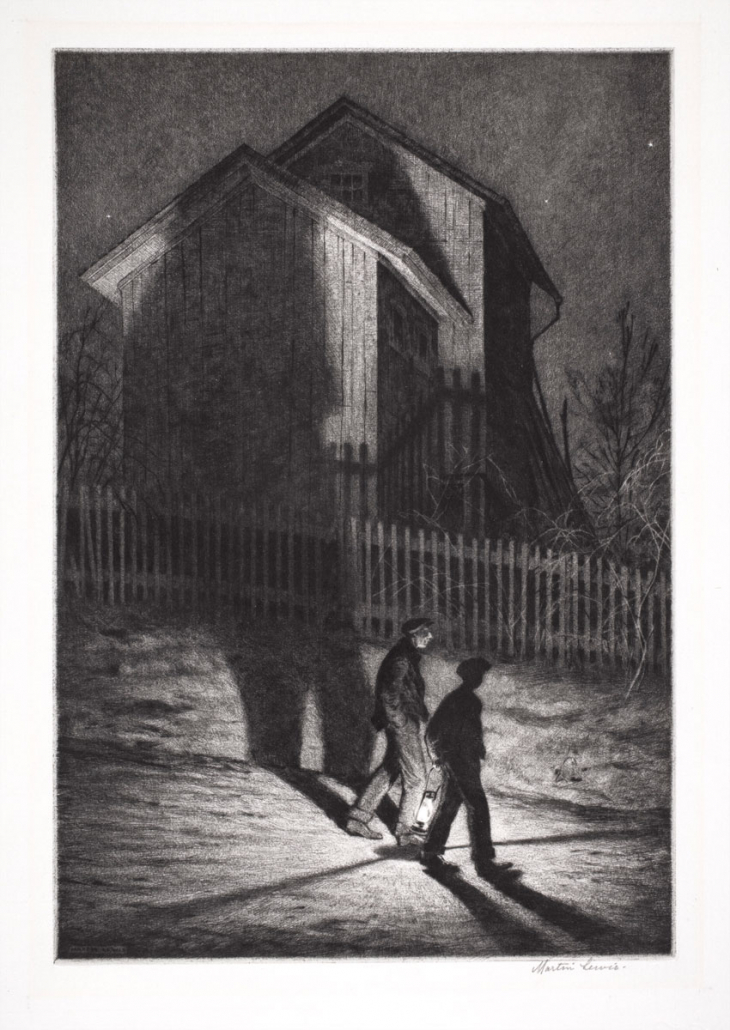