The Skull in the Nest

This colorful print by Alexander Calder was purchased by the museum in 2019 along with several other prints by the artist. This particular image was so popular with the design team for the Art Complex Museum’s newly opened Founders Room that it was enlarged to mural size, for one wall in the exhibit space. The larger-than-life mural provides a splash of color and gives visitors the opportunity to engage with the image on a grand scale. The artist’s elegant signature can be seen in the lower right-hand corner.

Calder was an avid sculptor and printmaker who loved geometric shapes and primary colors. Many of his prints are abstract, but included symbols that could be deciphered, as in this image, The Skull in the Nest. One of America’s best-known sculptors, Calder became famous for his kinetic abstract mobiles that were first shown in the United States in 1932. He often used black, white and red in his structures and in some of his prints, explaining that “black and white are the two most disparate colors, and red is the color most opposed to the other two.” The combination of colors and shapes created powerful, yet enigmatic imagery.

In 1925, Calder produced an illustrated book, Animal Sketching, that foreshadowed his early wire sculptures of figures and animals. He also assembled a “circus” of miniature, hand-activated figures made from wire, with which he gave performances in his studio. These were created by bending and twisting a single wire into often humorous portrayals. Many federal agencies have commissioned works by Calder and most major American museums have his sculptures in their collections. 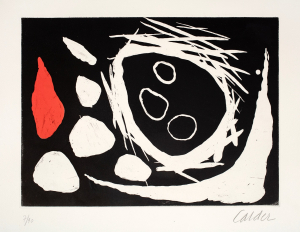 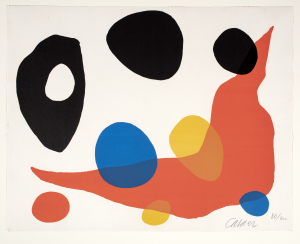 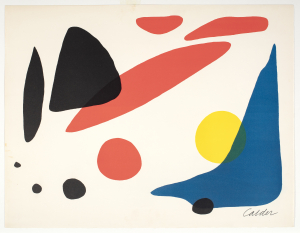 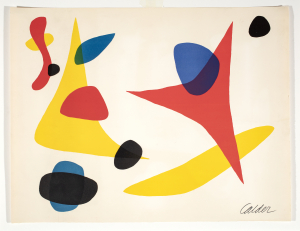