The Seven Ladies and Reading Bunny

These entertaining assemblages, a sculptural technique using found objects, are inspired by old toys and other objects Stasiuk collects, which take on a new personality when arranged and assembled together. The Seven Ladies features a group of seven figures, dressed as if they are embarking on a group shopping trip. With colorful purses hooked over their arms, each has a distinct character established through their dresses and shoes, the tilt of their heads, hairdos, and facial features. The sprightly bunch seems eager to begin bargain hunting!

The amusing Reading Bunny looks up from her reading as if distracted by a sudden noise, with her ears perked up as she waits expectantly. Her colorful skirt and buttons express a whimsical fashion sense and the book she holds in her “paws” lends a nod towards the promotion of literacy.

Stasiuk described his inspiration to create the sculptures stating that the shape, color, and sense of history in found objects hold provides a sense of intrigue for the artist. “There is also something that happens when the right objects are placed together. They become enhanced by color, texture, contrast, and variety. It is the same thing that inspires painters: an orchestration of the elements. When I look at objects, I am already editing them in my mind to choose the portion that will be useful to me.” Sometimes the shape or color of an object dictates what it will become.

Stasiuk grew up in rural Connecticut where there were barns and sheds full of old tools and weathered objects. He remembers a decaying piano that seemed so profound, given the importance of the piano in his family’s living room. Those objects are nostalgic to his childhood, and to an era that predates the artist. When he makes use of certain objects it is almost like collaborating with someone who came before him, according to Stasiuk.

“My work is all about discovery, discovering the objects themselves, what I can do with them, and how I can transform them. It’s a form of storytelling and I enjoy bringing characters to life,” said the artist. The starting point can be the concept or the found object. Sometimes a prompt sets him on a specific search. A recent animal-themed show had Stasiuk hunting for objects that looked like animal torsos, and this is the detail that establishes scale of an animal. It might take two or three objects joined together to make the one torso. Or, if the perfect head is found, then the torso comes second. It is not a linear process. Gathering objects is something that he has done for over 30 years. It still continues, but his search for an object at this point happens in his own studio.

When asked how he got started with this art form, Stasiuk replied, “Years ago there was a scrap pile of metal on the waterfront of Portsmouth, NH, where I have lived for 38 years. The first sculptures I made were very primitively assembled and included elements from the scrap pile. They were like scarecrows in a people and animal format. When I began, it felt like I was just fooling around, but came to realize that a combination of work and play was my best working process as an artist. I was searching for an art form that I could commit to with a five-year goal in mind. I did that with found objects, and now it has been over 30 years.”

Stasiuk finds it gratifying when he makes a really successful piece. “It’s like having superpowers. It includes both the element of discovery and problem solving,” he says. He loves that he can go to the flea market and buy a bunch of interesting stuff and call it a workday. Stasuik revealed that he made a deal with himself at a young age that he wouldn’t “grow up to hate my job.” He wanted to find work that was fun and feels he has accomplished that.  He considers the 33 years he spent working as a part-time elementary school art teacher part of that journey. He has witnessed firsthand how children approach creative projects. He describes children’s artwork as “exuberant, expressive, bold, and free-spirited,” and confesses that he usually likes their work better than his teaching demos.

Stasiuk has also done work for the Mudd Butt Mystery Theater Troupe, designing sets and creating costumes. He sees it as a true collaboration between adults and children that spanned three decades and numerous countries. “It was always a thrill to create something bigger as a group than what we could have created as individuals.”

Stasiuk earned his Bachelor of Fine Arts from the University of Michigan School of Art, and studied found-object sculpture at Haystack Mountain School of Crafts, Deere Isle, Maine. He lives in and maintains a studio in Portsmouth, New Hampshire. His imaginative sculptures, created with a child-like sensibility, bring a fun, new context to otherwise commonplace or discarded objects. 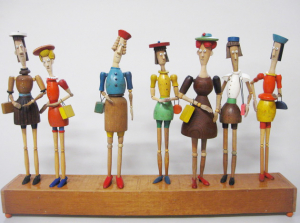 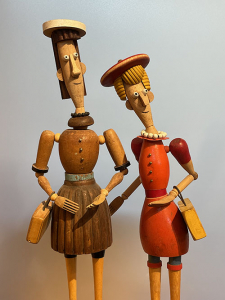 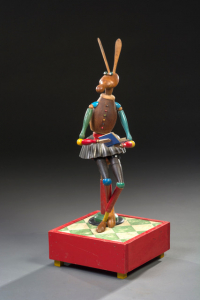