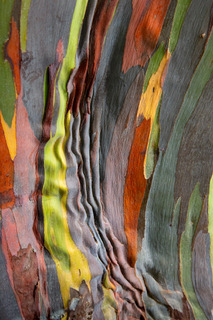 Joan Collins:
Cadence – The Surf and Bark of Kauai

Duxbury photographer Joan Collins has spent the last thirty years capturing what she calls, “the dramatic rhythm, permanence, and transience,” of the water in the waves off the coast of Kauai in Hawaii. More recently she has found the island’s giant eucalyptus trees and isolated jungle groves of rainbow eucalyptus, discovering that the curves and bark textures of these ancient trees mimic the fluidity and variety of the ocean’s surf.

In this exhibition we pair what she has captured from her twin muses. 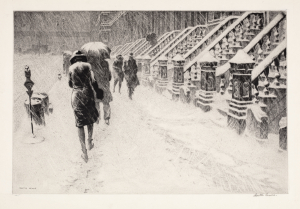 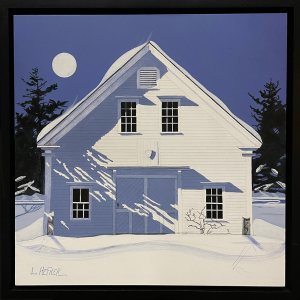 Our annual winter exhibition is one of our most popular, showcasing works in all media from artists far and wide.

Artists enter online and guest curators create a show that is a real time survey of the art that is being created by contemporary artists today. As well as choosing the works to be included, jurors award monetary prizes in a wide number of categories including “Best in Show.” 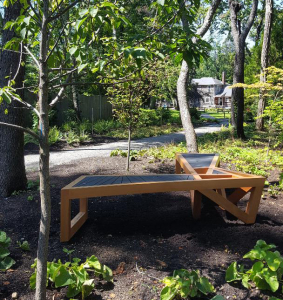 Five artists have made seating for our new Woodland Path, part of the museum’s newly landscaped grounds. Our open “call for seating” received responses from sculptors all over New England. We choose designs by Leah Woods, Jacob Kulin, Nancy Selvage, Mark DelGuidice, and Mitch Ryerson. 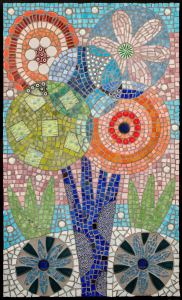 About being asked to create a mosaic for the Frieda Garcia Park in Boston in 2003, Lisa Houck says, “It was the beginning of my involvement with this wonderful, colorful, shimmering medium of mosaic. I have been working with it ever since. My heavily patterned paintings in watercolor and oil led very naturally into this new way of working with small reflective tesserae. With these irregularly shaped pieces, I create vibrant, imaginative images filled with color and pattern. I fabricate some of the ceramic pieces that are in these mosaics. These mosaic trees embody personalities: some are quiet and shy, some are dizzy and easily swayed, some are larger than life. I often use patterned, circular imagery that can evoke cells, flowers, droplets, planets, spirals and seasonal cycles in the natural world.” 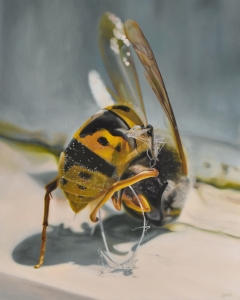 For this exhibition, we began by asking artist Carol O’Malia to be in the show. She then asked another painter to be in the show. That painter then chose another painter, etc. Hence the name “Tag.”  The artists picked friends, studio mates, former classmates, and other artists whose work they admired. Like a game of tag there were not many rules, other than being based in New England, and even that rule was bent.

Shown: Chil Mott, Untitled, from the Sill Lifes series, 2018, oil on board 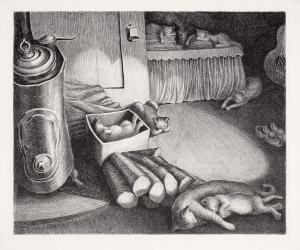 A prolific printmaker, Wanda Gág was best known for her children’s books, especially Millions of Cats published in 1928. Gág devoted much of her practice to drawing, a commitment that became a personal motto that she recorded in her diary, “draw to live, live to draw.”  She pursued her passion at the Art Students League in New York, working as an illustrator and sending money to her orphaned siblings. Her work as a children’s book author and illustrator brought Gág international fame. This exhibit features prints from the Art Complex Museum’s collection. 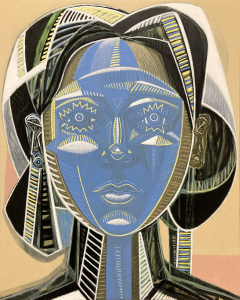 The Boston-based painter’s large, color-rich paintings begin with what he hears, not with what he sees.  He says, “Sight and sound run parallel in our perception, and these works do not intend to confound the two.  Rather, the interest is for the viewer to switch back and forth across subjectivity, allowing sound its visual memory.  As a word becomes a sound’s visual placeholder, so these paintings become their portrait.” 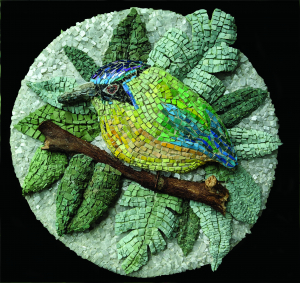 Three artists have chosen mosaic as the common language to explore issues affecting the planet, each in her own style.

Debora Aldo uses her signature material—pebbles—along with up-cycled contemporary materials, to infuse her lines with meaning. Nikki Sullivan and Anabella Wewer both use classical andamento to form their lines, but Nikki often uses a large found object as her focal point, while Anabella breaks down uncommon materials into regularly sized tesserae.

Each artist has embraced one or more topics within our changing world, and brought to it the unusual and uncommon set of skills that it takes to create a mosaic. 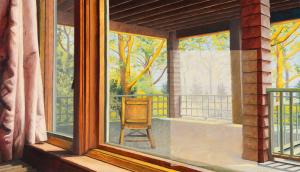 In continued celebration of the Art Complex Museum’s fiftieth anniversary, this exhibit examines the museum’s expanding permanent collection, amassed since its founding in 1971. Assembled after the museum opened, these art works reflect the collecting interests of founders Carl and Edith Weyerhaeuser, along with museum directors and curators as the ACM builds for the future.

The Art Complex Museum has collected work by members of the Boston Printmakers since the early 1970s. This exhibit features winners of the Ture Bengtz Memorial Prize, selected from the group’s Biennial exhibition, which are part of the museum’s permanent collection.

Bengtz was the Director of the Art Complex Museum from 1971-73, and began a tradition of hosting exhibits of work by members of the Boston Printmakers at the museum. He remained at his post for three years, until his sudden death in 1973. A memorial award in his honor, the Ture Bengtz Memorial Prize began shortly afterward.

Established in 1947, the Boston Printmakers was formed by a group of students assisted by Ture Bengtz (then Director of the Graphics Department at the Museum School, Museum of Fine Arts, Boston), Otis Philbrick (instructor for the Massachusetts College of Art), and Arthur Heintzelman (printmaker and curator of Wiggin Gallery at the Boston Public Library). The students included Bengtz’ pupil, Richard Bartlett (president), Shirley Thompson Hadley (vice president), and Gladys Wilcock (secretary/treasurer). Initially a regional group, the Boston Printmakers soon expanded its reach to include the national and international art world. 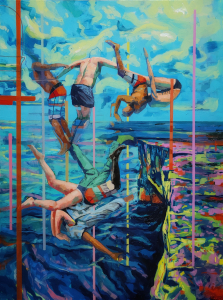 Growing up on the island of Jamaica, Massachusetts painter Andrae Green says that the Caribbean Sea never played a huge part in his conscious life, but he was always aware of its presence. He knew, unconsciously, that he could go to it whenever he wanted and that it would always be there for him. He remembers his father bringing his family to Kingston Harbor and watching the young boys jump off the docks, into the abyss. Their fearless trust in the sea always fascinated him. Their leaps of faith inspired him.

Since moving to western Massachusetts and no longer having easy access to the sea, Green feels a longing that has translated into his most recent body of work: paintings that speak to the limitless potential for human imagination and freedom (a perspective that is very needed in these times) and drawings about weightlessness and freedom, all inspired by bodies of water and the Caribbean landscape. Green says that in the Caribbean mind, the sea, “Brings both joy and fear, love and hate, hope and resentment.”