Artist and Guest Curator, Anne Plaisance, has assembled a group of artists who are working with what she calls, “their vision of the day after tomorrow.” Responding to contemporary issues and citing research reports from both the United Nations and Harvard University on looming problems like climate change, rising sea levels and extreme weather, Plaisance believes artists can focus on leaving the best legacy they possibly can, through art and culture, for whatever comes next.

She says, “This exhibition is a requiem for humanity, an homage to creativity and beauty, a ‘chapeau bas’ to love and generosity, an adieu to memories, a last embrace of our cherished ones.” 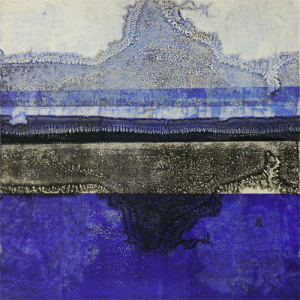 Brent’s mixed media works take discarded items from her house, community, and town transfer station to create sculptures and alternative landscapes that embody the craziness of motherhood and environmental chaos.

The mix of old kids’ clothes, paint globs, toys, and rags, incorporated with dirt and other natural elements, look as if they are simultaneously growing and decaying. They express the weight of raising children in environmental disorder while juggling our lives and trying to maintain a sense of self and balance. Paintings incorporating decaying flowers and plants drip and wilt. Referencing the overuse of stuff in our lives and the mental load that women carry around, piles of trash take on a second, organic life. Brent works through the mess of life to try to find order in chaos and beauty in the reality of imperfection. 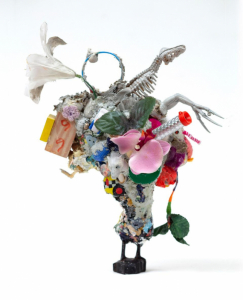 The 1960s and 1970s were a turning point in American printmaking, with the rise of communal studios that provided creative and technical exchanges between artists. This exhibit examines printmakers working in the 1970s through works from the collection of the Art Complex Museum and artist’s contributions to the contemporary art form. 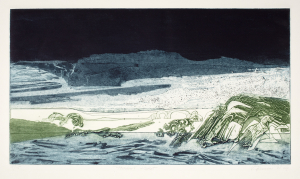 The museum was closed for major renovations to the building and grounds.

Shaker Works, Then and Now: A Young Person’s Interpretation of the Shaker Form February 22 – May 17
Students of Gerry Clifford at the Dedham Country Day School

Meredith d’Ambrosio: Landscapes of the North Countries Through February 14